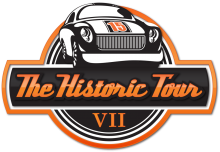 The Historic Tour headed out to the tight and technical Red Star Raceway on Saturday 6 August for the fifth round of the 2016 season. A chilly winter’s morning greeted the competitors but as with the racing things certainly heated up as the day went on.

The first race for the Marlboro Crane Hire Pre-79 Historic Saloons, Pre-84 Sports and GT and Classic Thoroughbred category saw giant killing Anton Raaths (Mazda 100 Coupe) grab pole position ahead of Willie Hepburn (Opel Rekord V8). Hepburn grabbed the lead into turn one with Raaths, Fred Konig (Porsche 911 RSR) and George Avvakoumides (Porsche 911 RSR) in tow. Jannie van Rooyen (VW Scirocco) was the best of the rest with Colin Ellison (Alfa Romeo GT AM) and Gert Botes (Ford Escort MK1) in hot pursuit. With the leaders breaking away in front the mid field were having a great battle as well.

Mike O’Sullivan (BMW 2002), Colin Kean (Mercedes Benz 280CE) and Willem Vonk (Ford Escort) were involved in a titanic battle of their own for twelfth position. Race leader Hepburn slowed on the fourth lap and retired coming out of turn three. Van Rooyen didn’t help his chances with a spin coming out of the same corner. The fight for ninth position saw a late charge between Marius Verwey (Datsun GX Coupe), Quentin Willis (Ford Escort MK2) and Paige Lindenberg (Ford Escort MK1). When the chequered flag dropped it was Raaths who took an easy Overall victory ahead of Konig and Avvakoumides.


The second race for the Pre-79, Pre-84 S&GT and CT category saw Raaths grab an immediate lead ahead of Avvakoumides and Konig. Ellison was the best of the rest with Botes and Alan Poulter (Volvo 122S) in tow. Van Rooyen was fighting his way through the field from further back on the grid and was up to sixth place by lap two. Konig got past Avvakoumides on the third lap and set about after the race leader. Further back in the field the racing was just as close. Harry Lombard (VW Beetle), Barry Nel (Datsun 1600 Y) and Willem Vorster (BMW 2002 Ti) were involved in a titanic battle of their own. Raaths romped home to yet another victory ahead of Konig and Avvakoumides.

The Investchem Formula Ford Kent category was the only single seater category on the day and produced their usual brand of close and competitive racing as always. Race one winner Dean Venter (Swift) was penalised thirty seconds for a jump start dropping him back to fourth position. This handed the victory to Andrew Horne (Royale RP31) with Ian Schofield (Mygale SJ) and David Jermy (Van Diemen RF90) picking up second and third places respectively. Venter game back with a vengeance in the second race and put in a dominant performance to romp home to victory ahead of Schofield and Jermy.

The feature Geyserworx Historic Endurance Series race which was held over 90 minutes saw some close action in the early stages of the race. Alex Gillespie (Chevron B19) took an early lead and set about breaking away from the rest of the chasing pack. David Jermy (Lotus Birkin 7) slotted into second place ahead of Jeff Gable (Lotus Birkin 7) and Sean Hewitt (Lotus Birkin S3). Colin Ellison (Alfa Romeo GT AM) was the first of the tin top brigade in fourth position. Gillespie seemed set for certain victory but he retired on the twenty first lap, handing the lead to Jermy who was still being chased down by the rest of the pack. Ellison saw his lead amongst the tin top brigade come to an end on the thirty second lap as well. After forty laps of hard racing action it was Jermy who held on for a well-deserved Overall victory ahead of Gable and Hewitt. Hubi von Moltke (Mercedes Benz 280CE) claimed the tin top honours ahead of Barry Nel (Datsun 1600 J) with a fine fourth place overall.

The second race saw Muller break away in an early lead ahead of Kruger and Gearing. Muller slowed with a puncture on the fifth lap handing the Overall victory to Kruger. Jeff Gable (Birkin 7) came through to grab second position from Gearing. Kruger took the double in class B with Smit and Findlay taking classes L and C respectively. Muller continued to circulate to finish further down the field but still being classified to take the class T honours.

The second race saw Kruger turn the tables on Morgenrood as he claimed the Overall and Trans-Am victory. Garrow picked up the double in Sports & GT D, with Winterstein and ten Doeschate doing the same in Little GIANTS D and Little GIANTS E respectively. Campher, Taylor, du Plessis and Taylor Senior all took the double in their respective classes while Lombardi did the same in Legends of the 9 Hour Production Cars U2.

Stan Stacey (Alfa Romeo GTV 2.5) came through to take the Overall win in the second race with Brits picking up second once again. Johnstone claimed third Overall this time around as well. Stacey, Brits and Johnstone claimed the top three positions in the Trophy class as well. Van Aarle took the double in the Marque Car class with Vasques and Machiel Oberholzer (Mercedes Benz 190E) picking up second and third respectively.

The next round for The Historic Tour will be on the 10th of September at Phakisa Freeway outside Welkom in the Free State. 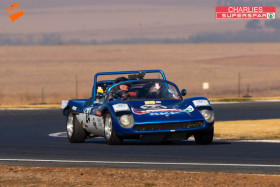 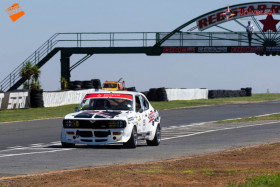 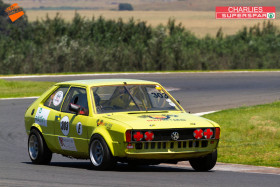 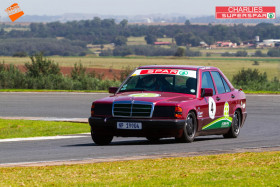